The home-grown fitness brand, PowerMoves, recently opened its third Pilates studio in the leafy enclave of Rochester Park. The move meets the growing demand for low-impact therapeutic exercise, while filling the void for a clinical Pilates practice in the new total healthcare centre situated in the exclusive neighbourhood of Rochester Park.

This charming new studio remains true to the unique Pilates in the Park concept pioneered and owned by PowerMoves. From the opening of its first studio in Bishan Park, followed by a second at Dempsey Hill, this oneness with nature has always distinguished PowerMoves from its competitors. All three studios are tucked away from the hustle and bustle of the city, enveloped in lush rainforest, and housed in environmentally friendly buildings that feature an abundant use of natural materials.

In particular, the Rochester Park studio is set in a sprawling black and white bungalow that blends in seamlessly with its neighbours in this heritage-rich little pocket of old Singapore. Like its predecessors, it boasts floor-to-ceiling glass windows that invite the sunlight in while keeping the heat out.

When asked to explain the growing popularity of Pilates, Founder and CEO of PowerMoves, Ms Claudel Kuek, said: “Pilates is growing more popular as our lifestyles become more sedentary, resulting in back problems and poor posture. This is compounded by the fact that our population has begun to age sharply.”

Physiotherapists, chiropractors, orthopaedists and all fitness professionals recommend strength-and-flexibility Pilates exercises on entering middle age, since it improves flexibility and staves off the stiffness commonly associated with an ageing body. Pilates specifically works on the core muscles to protect the spine, build bone density and add muscle mass – which in turn speeds up the metabolic rate. In short, it fulfils every woman’s fitness wish list as she enters her 40s and moves into her golden years. Of course that’s not to say that Pilates doesn’t benefit the male physique – it does. Indeed, PowerMoves boasts a number of high-profile celebrity couples among its clientele.

With the opening of the third PowerMoves studio at Rochester Park, fitness-conscious individuals residing in almost every part of Singapore are able to find a PowerMoves Pilates in the Park close to home. An hourly session is not just an investment in graceful ageing, it’s a therapeutic workout for the mind, body and soul, and a retreat to nature.

And here’s a final little sweetener. All three PowerMoves’ Pilates in the Park studios are surrounded by excellent watering holes and superb eateries. So when you’ve worked out and worked up an appetite, you can indulge in moderation knowing you’ve earned the right to do so guilt-free.

Enjoy PowerMoves’ Pilates in the Park, in every sense!

Written by Suzanne Lauridsen
for PowerMoves Pilates in the Park 🙂 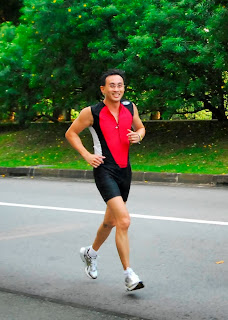 Runners usually exhibit great strength in their legs but may have issues with tightness in the hips, with lower back or knee pains, and/or problems with balance. Pilates exercises help runners improve on their core strength allowing them better posture while maintaining the balance in the muscles of the back and hips. Pilates also teaches runners proper breath control which help to increases their stamina and endurance.

The chosen exercises herein are beneficial to the runner because they challenge the core and emphasize the neutral positioning of the pelvis and hips. They also help correct postural imbalances, create flexibility and stretch the lower body.

For all exercises, remember to draw your shoulders down towards your hips and far from your ears, and keep your abdominal muscles engaged while long in the waist.

Lie on one side leaning on the elbow of the lower arm with hands behind your head. Stabilise the bottom leg on the floor and hold the top leg at hip height. Minimise the rocking of your trunk by engaging your abdominal muscles. As you exhale, swing the top leg as far forward as possible with a flexed foot. On your inhale, swing the top leg as far back as possible while pointing your foot and elongating your leg. Keep your pelvis neutral and quiet throughout as you repeat the back-and-forth swing 12 times.

Lie on your back with arms out in a T-position. Legs are together, straight and slightly pointed. Exhale as you bend one leg in toward your chest and straighten it upward, perpendicular to the floor, foot flexed. Keep other leg and pelvis on the mat quiet and stable. Inhale as you circle the raised leg inward past the centre of your body, then down and around. Make your circle only as big as you can without moving your hips and pelvis. Exhale on the next circle, alternating the breathing on each circle. Repeat 10 times before switching to the other leg.

Lie face down on mat with legs and arms. Inhale as you slowly lift right arm and left leg off mat as high as you can (extending fully your arms and legs away from each other in opposite directions). Hold for one count and then lower to start as you exhale. Repeat on opposite side and work up to 12 reps on each side.

Sit upright with straight legs opened slightly beyond shoulder-width, feet flexed. Arms are in T-position reaching far out to the opposite sides. Inhale as you rotate your torso to face the side of room. Keep pelvis anchored as you move the arms and head with the trunk. On the exhale, reach forward long over the leg, left hand extending past small toe of right leg. Inhale to extend farther deepening the stretch of hanstrings and lower back. Exhale to pull yourself back up to sitting tall, rotate back to centre starting position and repeat to the other side. Work up to 6 reps on each side.

Lie back with legs straight and arms extended overhead (but not touching the floor). Pull belly button in toward your spine. Exhale as you bring arms overhead and lift shoulder blades off the mat, curling all the way up until arms are parallel to legs. Exhale again as you slowly uncurl back to start. Do this 8 times.

Lie prone engaging abdominal muscles, lift the chest and extend the back. Your legs are in a straight line behind you, lifted off the mat. Place your elbows directly under the shoulders, your lower arms parallel to each other. On the exhale, bend the right leg and pulse it twice. As you straighten the right leg, bend the left leg to pulse twice on the next exhale. Repeat the pulses while alternating legs working up to 10 sets of pulses each leg.